Offa robbery: Police retreats, asks Saraki to respond via statementThe Nigeria Police seem to have soft-pedaled on its alleged onslaught against Senate President, Bukola Saraki over its ongoing probe into the Offa Bank robbery in Kwara. The Police had on Sunday asked Saraki to turn himself in for questioning over the incident.Force spokesman, Jimoh Moshood, while parading the suspects, stated that the former Kwara governor and the incumbent, Abdulfatah Ahmed were indicted.His words: “The Five (5) gang leaders further confessed during investigation that they are political thugs under the name Youth Liberation Movement a.k.a “Good Boys” admitted and confessed to have been sponsored with firearms, money and operational vehicles by the Senate President, Sen. Bukola Saraki and the Governor of Kwara State, Alh. Abdulfatah Ahmed.“Meanwhile, the Senate President, Sen. Bukola Saraki is being invited by the Nigeria Police Force to report to the Force Intelligence Response Team office at Guzape, Abuja to answer to the allegations levelled against him.”But on Monday, media was informed that Saraki has been asked to state his position in writing. A top Police source made the disclosure to our correspondent. He said: “The Senate President no longer need to appear before the investigating team. He has been asked to tell his own side of the story in writing.“A detailed explanation would suffice at this time. His statement is expected to be submitted within 48 hours.”Recall that Saraki yesterday insisted that there was a grand plot to implicate him. He said: “I want the entire public to disregard this claim as a baseless allegation and another ploy by the Police to implicate him by all means”“Let it be known that there is no way I could have been associated with armed robbery against my people. When the Offa robbery incident happened, I was the first top public official to pay a visit to the place and right there in the palace of the traditional ruler, I put a call through to this same Mr. Ibrahim Idris, the IGP, requesting him to make certain specific security arrangements as demanded by the people.” 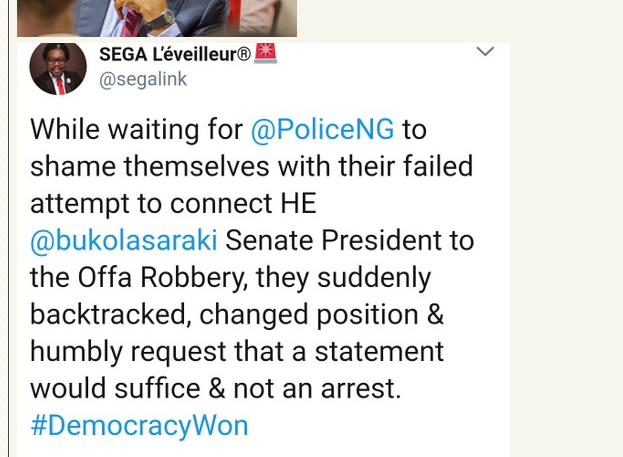 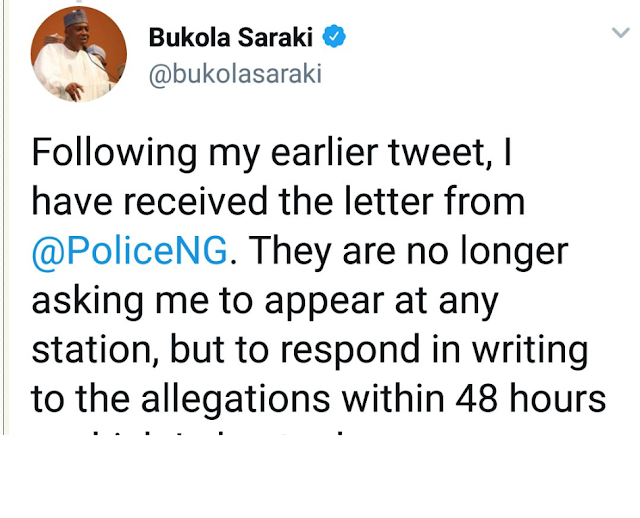