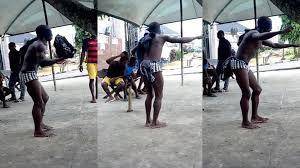 A student of Niger Delta University was caught stealing phones at the Federal University Otuoke, Bayelsa State. and was forced to dance for several hours as punishment.
The NDU student who was caught in the act was said to have stolen four phones, and  was nabbed at the point where he was about selling the phones.
The student whose identity is still unknown was asked to dance for several hours as he receives strokes of cane, not just that, he was also forced to hail the students around as they strike him.