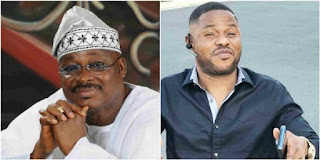 Oyo State governor, Abiola Ajimobi has maintained that no amount of curses that people of the State place on him, can take effect on him because he is doing the right thing.
Ajimobi said this when he spoke with newsmen after the Eid el-Kabir celebration at Agodi Eid Ground.
Curses can’t affect me because I’m doing the right thing.
He said this while reacting to the number of curses the state residents have placed on him following the demolition of the music house owned by singer Yinka Ayefele.

“The lesson I learnt from the sojourn in the last seven years that we have been running the government is that one needs to fear God. If one fears God, no matter the curses placed on him, such curse can never have effect on him.
And if someone does what deserve curses and people pray for such an individual, the prayer cannot work for such a person. For me, no matter the curses, it can never affect me because I know I’m working for prayers and not curses. I’m serving the people wholeheartedly and I’m happy that God will give us success.”

“I never persecute people, but follow the law and stick to it. Those who say you are wrong today, tomorrow they will see. As a leader, anytime you want to make a change, some people, enlightened, unenlightened, ignorant, mischievous will play politics with it. But, a good leader must have the courage to go ahead.
If you remember the great Prophet Mohammed, when he was talking about the Almighty God to the people, they sent him away from his hometown. So, anytime we, as leaders, heads of government are trying to make changes, people talk, but we forge ahead, no matter what they say.
We will never allow this state to become a banana state. We will not allow it to be an animal farm. If you see any state that is doing well in the world, it is that they have rule of law and they obey them. Everybody must obey the law. So, we thank God that we succeeded because we have adhered to law and order.”