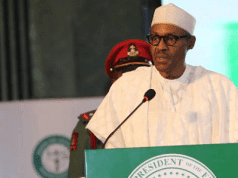 President Buhari on Friday, in Daura has said the string of victory recorded by the All Progressives Congress (APC) in bye-elections in Bauchi, Katsina and Kogi States is sufficient proof that 2019 elections will be won by the party.

Receiving the representatives of the 34 Chairmen of the Association of Local Governments of Nigeria (ALGON) in Katsina State, President Buhari said: “coming against the backdrop of the victory in Ekiti governorship election, the string of victory by our party, the APC, is a clear indication of the way things will go in 2019.
“For those who are discerning; those who have ears and eyes they will see, hear and understand. Those who don’t understand are entitled to their mistaken assumptions.” The President, therefore, emphasized that the victories in the recent polls are indeed “the sign of things to come.” He thanked the leaders of the association for paying Sallah homage to him and for their message of congratulations on the performance of the party and the administration, assuring them that he would continue to do his best for the nation.
Speaking on behalf of the members, the Chairman of ALGON in the State, Alhaji Mohammed Na’Allah, expressed their support and commitment to the success of the Buhari Administration.
At another meeting with the leaders of the Christian Association of Nigeria (CAN) Katsina State, President Buhari expressed his continued determination to respect the diversity of the country, saying that he will run a government that is fair and just to all Nigerians.
The President thanked the CAN leadership in the State for living in peace and harmony with other religious groups, and for supporting his administration in its policies and programmes
The CAN leaders who spoke during the visit, the State Chairman, Rev. Nelson Onyeakachukwu, and an elder and coordinator of the Christian Pilgrimage in the State, Haruna Danjuma expressed happiness with the President’s performance.
They described him as the State’s good ambassador who had made everyone proud.
“Christians in Katsina are happy with both Governor Masari in the State and yourself at the center. We will continue to support both of you,” the CAN leaders told the President.