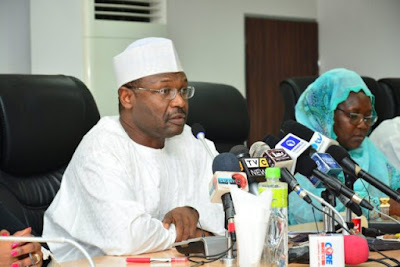 The Independent National Electoral Commission on Monday said it had discovered new methods to be used by some politicians to buy votes in the forthcoming general elections.
Speaking at an interactive session with traditional rulers in in Osun State, the INEC National Commissioner, Mr Festus Okoye, however warned that any politicians caught buying votes or engaging in acts that could have negative effects on the elections would be punished.
Okoye, who was represented by the Osun State Resident Electoral Commissioner, Mr Segun Agbaje, said the commission had been informed that some people were inducing voters to release their PVCs or Voter Identification Numbers.
He said the intention behind the moves was to either stop the owners of the cards from voting or to attempt using the VIN to hack into the commission’s website and preload card readers ahead of the elections.
He said, “We have introduced a partial ban on the use of mobile phones and other photographic devices by voters while in the voting cubicles. Also, we are introducing the rolling and flattening of ballot papers by voters before casting them into the ballot boxes.
“However, new methods of vote-buying are being devised. We have received credible information that some partisan actors are now buying PVCs from voters or financially inducing them to collect the Voter Identification Numbers on their PVCs. In some instances, telephone numbers and details of bank accounts of voters have been collected.”
He however assured the public that the commission would work with the security agents to deal with the violators of electoral laws.
Agbaje said anyone found guilty of buying votes would pay either a fine of N1m or be sentenced to one year in prison, adding that multiple registration, impersonation and being in possession of more than one PVC would attract N1m fine or a 12-month jail term or both.
The Ooni of Ife, Oba Enitan Ogunwusi, urged royal fathers in the state to ensure that there was peace before and during the elections in their areas.